Why V4 bikes are faster than in-line 4s

If you are a fan of MotoGP or WorldSBK, you have probably noticed how strong Ducati is at the moment. And how aprilia is on the rise and after the top spot on the podium in the MotoGP world championship. They have one thing in common; a V4 engine. And that makes them fast. Bloody fast. Let us tell you why V4 bikes are faster than in-line 4 bikes.

It becomes a familiar sight. A MotoGP Ducati sweeps past a Yamaha or Suzuki. And also in WorldSBK it is no strange phenomenon for a Ducati to blast past other bikes on the straights. Like they are some kind of rocket. There are multiple reasons, but mostly the crankshaft is the determining factor why V4 bikes are faster than in-line 4 bikes.

WHAT IS A V4 ENGINE

The V setup is the main difference between a V4 and a in-line 4 engine. The latter contains 4 cylinders as well, but those are set up in a straight line instead of a V shape. Of course, with this set up other differences come along as well.

THE USE OF THE V4 IN MOTOGP

V4 bikes make more horsepower because a V4 engine has a shorter crankshaft, which also makes it stronger and stiffer. A v4 engine also creates less friction and vibration because it runs on three main bearings. Not five, which is the minimum required by an in-line four engine. And it provides fewer pumping losses.

All this adds up to why those poorer-handling but faster V4 bikes are difficult to beat on track when you ride a slower but better handling in-line four bike.

That said, not all V4 bikes are faster when it comes to road bikes. The Ducati Panigale V4 is insanely fast. But the aprilia RSV4 isn’t that much faster in top speed than a Honda CBR-1000RR with its in-line four engine. In fact, I bet the top speed of the Honda is higher. The RSV4 is just able to deliver way more torque, so it is quicker on corner exit. But the MotoGP V4 bikes don’t have the same V4 engines as their road bike siblings (dûh).

MotoGP in-line four engines must cope with crankshaft flex, crankcase flex, more friction and vibration and greater pumping losses. This all makes the engine less able to produce more horsepower without any problems.

WHY DUCATI'S MOTOGP BIKES ARE SO FAST

Ducati’s MotoGP bikes use a special kind of 90-degrees V4 engine. Or better said, special valves. They use desmodromic valves. Those valves were first used by Mercedes in their 1950s Formula 1 engines. They proved to be rather successful. Desmo valves maximize the time area of the inlet and exhaust valves, so Ducati is less restricted with cam profiles. And can open and close the valves further and faster for better breathing and therefore more power.

WHY V4 BIKES ARE FASTER

THAN IN-LINE 4S ON THE STRAIGHTS

V4 bikes are faster on the straights. While it often isn’t a major difference, it is just enough to make the difference. Overtaking on the straight is just easier than overtaking in corners. It also helps a rider to catch a draft off the bike in front. This allows a rider to jump out of the draft and set up an out-braking maneuver.

Third to that, it gives a rider more options in their overall tactics, since they’re not playing catch-up all the time. Gaining meters on the straights also helps race distance performance. A rider does not need to hammer the front tyre as much on the brakes, nor destroy the rear tyre by getting aggressive with the throttle. And a rider can take less risks when entering corners. All since they don’t have to regain meters that were lost on the straights.

WHY USE AN IN-LINE FOUR ENGINE

And that’s just the thing. In a race, certainly when the racing is really close nowadays like in WorldSBK or MotoGP, there is hardly any room left in corners. Those guys always try to ride the perfect line. And on that perfect line, there is no room for anyone else.

You often see it in MotoGP qualifying. In-line four bikes like the Yamahas and Suzukis perform really well and are able to set super-fast qualifying laps on a clear track. But when they get boxed in by faster V4 bikes in a race, they are in trouble.

‘Cause when they have cut through the corners, there is suddenly room again. And that is where the V4 power comes in. And gets to stretch its legs.

THE DISADVANTAGES OF V4 ENGINES

NOT ALL FUN AND GAMES

One of the disadvantages of a 90-degrees V4 engine is its length. Because they are so long they cause headaches for chassis designers. You don’t want a chassis that’s too long. Chassis designers rather keep the motorcycle’s wheelbase short for quick turning.

Another disadvantage of V4 engines is that the rear cylinders take up a lot of space and create a lot of heat in the crucial area of the bike. The designers must deliver clever work on frame, airbag, exhaust and fuel tank design to be able to cool those two rear cylinders and keep the bike from overheating.

To help with the first factor – being quick turning – the engine is mounted while slightly rotated backwards by raising the front cylinder. This reduces the wheelbase (albeit just a little) and brings the crankshaft forward. This puts more weight on the front tyre for better turning.

THE PROS AND CONS OF IN-LINE FOUR ENGINES

When a manufacturer chooses an in-line four engine, the chassis designers can almost lay back, since the factors mentioned above don’t really concern them. The only thing with in-line four engines is that they are wider. This makes it difficult to use big-enough throttle bodies and induction trumpets.

Using bigger throttle bodies and trumpets would give the in-line four bike more power, but would also make them too wide. Which on its turn is bad for their aerodynamic performance.

One of the biggest advantages of using an in-line four engine is the easier packaging and the mass centralization. This makes the bike faster when the track allows them to use their better corner speed.

The extra crankshaft gyro of an inline four is more difficult to divert from its trajectory when a rider wants to tip into a corner. But once the rider has done that the gyro helps the rider to maintain its line. That is one of the reasons why MotoGP bikes with inline four engines are faster through corners.

HOW MICHELIN F*CKED THE IN-LINE 4S

Okay, we might have been a bit rough with our heading there. But the current deal between Dorna Sports (the authority behind the MotoGP World Championship) and Michelin has diminished a bit of that corner speed magic of the in-line four bikes.

WHY V4 ROAD BIKES ARE SO EXPENSIVE

Owning a fast bike comes with a price. That V4 engine is one of the reasons why Ducati Panigale’s and aprilia RSV4’s are so expensive. A V4 engine is more complex to build than a four in-line. And therefore more expensive to build. All those costs are passed on to the customer of course, explaining the heavy price tag.

A V4 engine also weighs more due to the double camshaft and the two separate cylinder blocks. And it can be up to 40% narrower than a comparable in-line engine. This ensures a silhouette so narrow that aerodynamicists get tears of joy in their eyes.

And let’s get that skeleton out of the closet; V4 engines seem to delicate ones. The in-line four bikes seem to last longer. But that might not even be due to its in-line 4 engine. This might also be the case because most Japanese brands use in-line 4’s. And the Japanese are well known for their high quality products, when it comes to longevity. But there is one thing you can not deny: a V4 bike delivers more character. At least engine wise.

You will never hear us say Japanese bikes have no charm or character. Personally, I absolutely adore old school Japanese race bikes. And I love racing the Yamaha R6 on track. It is one of the best bikes ever made with a very feisty character, if you ask me. But I ride a V4 bike as well. And that growling V4 engine, that’s just something of another level. It is a different experience. The R6 gives me one heck of a smile on my face and I’d love to keep that feisty thing forever. But the RSV4 gives me goosebumps. And butterflies in my stomach.

But that delicacy of V4 engines also comes with lots of maintenance. It’s not too bad. You just have to check it regularly. So the average cost of maintenance is a bit higher, but you won’t have insane spikes in your cashflow (negative ones) if you just give it regular TLC.

Also, a V4 engine offers a lot of leeway in the installation position and thus the choice of center of gravity. The complexity of the engine, but also its power and flexibility is what adds extra coins to the price tag. Among other things of course. ‘Cause if there is one brand very strong on the marketing side of it all, then it is the Bologna brand. So you pay extra, because it is a Ducati. Not just for a Duc, by the way. Most Italian brands are very aware of their brand image and don’t shy away from asking a bit more of your money because their machinery has that sexy Italian charm.

V4 bikes are often faster than in-line 4 bikes, due to their different engine set up. Of course, they aren’t faster just because the cilinders are arranged in a V-configuration. Other factors like a shorter, stiffer and stronger crankshaft and less pumping losses also play their part. It all allows for the engine to produce more horsepower, giving it a better topspeed. So it becomes faster.

The V4 setup does effect the handling of the bike, especially when turning. By installing the V4 engine in a different position than one would install a in-line 4 engine, manufacturers try to minimize that effect. Especially Ducati seems to have it figured out for their MotoGP bikes. How to build a proper V4 engine that gives the bike as much power as possible while still being able to turn it into corners. And all that high tech MotoGP technique resulted in two of the most popular road legal sport bikes of all time; the Panigale V4 and the Superleggera.

All that technique and power comes with a price though. Wanting one of the fastest bikes on the planet means paying a decent amount of money to own it. But hey.. then you can blast past everyone else on track on the straights. And wave while doing so. 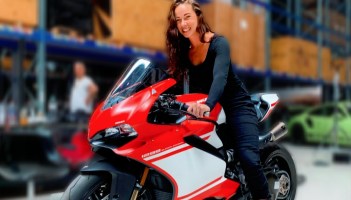 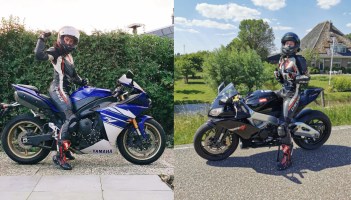 The Yamaha R1 vs the aprilia RSV4 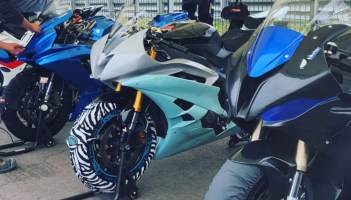