Readers who have been following us at REDRIDINGBOOTS for a while now have come across the Yamaha FZR750 before. We recently acquired one, an FZR 750 from 1987. We will rebuild it into a Yamaha FZR750R OW01 replica. Let us tell you more about this bike and why it takes the spotlight in our Classic Crush-series.

With the introduction of the Honda VFR750R RC30, Yamaha had to step up their game. And so they did. They replied with their homologation special, the Yamaha FZR750R OW01.

HISTORY OF THE YAMAHA FZR750R OW01

The World Superbikes Championship of those days will always be remembered by true motorcycle enthusiasts. Especially the ones with racy interests. The rules and high level of racing of this Championship produces some of the most groundbreaking production motorcycles of all time. The FZR750R OW01 is no
exception.

Yamaha already took part in racing with its FZ750 and its FZ750R model (so both without the ‘R’ after the FZ part). Remember what we said about that magical ‘R’? Put an extra one in the name of your new motorcycle model and it instantly goes faster. And will be more successful. Period. We’re not quite sure how that works, its just fairy dust magic.

Yamaha introduced their new mighty machine to the public just in time for the 1989 WSB season. The frame was similar to the FZ version, but better. And the aluminium was of way better quality. It had an Öhlins rear shock, loads of magnesium and titanium parts and a six speed gear box. And don’t forget about the quick, solid running engine.

Over the years, a total of 1.000 Yamaha OW-01’s were made. Most of the bikes that endured time (and their riders) are in the hands of racers and collectors.

The Yamaha FZR750R OW01 had a in-line four cylinder engine with a five valve head. This meant 3 intake and 2 exhaust, so 20 valves in total. This construction wasn’t new, the FZ model had that too. But still, it was different. ‘Cause the FZR was a road legal homologation bike that was especially made for racing on track.

So it contained more titanium to make it lighter, a close ration gear box and flat-side carbs. All those racy elements made it a proper race bike you could ‘just’ buy and ride on the roads. Or better said; race it on the roads. All those fancy parts also came with a slight downside, as is to be expected. Just like the Honda R30, it came with a heavy maintenance schedule if you wanted it to keep running nice and sweet (bit of an oil thirsty baby!)

To say the Yamaha FZR750R OW01 was a good road bike might be a bit much. You had a proper racing body position when seated on it. Think of high placed foot pegs, low bars and a hard foam racing seat. But one didn’t really care about that. If you could afford one at that time, you felt like a true racer. Even when you didn’t actually race.

Although the OW01 had great technical features, ran fast and had a great design, it sadly never claimed the World Superbike Championship title. It did win 16 races out of the total of 98 races entered. It did win other races and championships, like the British Championship in 1991 with Rob McElnea and the 1993 Daytona 200 with Eddie Lawson.

RACE IT OR STARE AT IT

NOT MANY ROAD REGISTERED OW-01'S

Because the FZR750R OW01 was designed to such a racy standard, many owners took it to the one place it belongs; to track. So many of them actually raced the bikes. And therefore crashed them, banged them up etcetera. Most other sold units were bought just to stare at it.

From the 196 units sold in the UK between 1988 and 1991, only 88 bikes were registered for the road. So most people bought one to keep it safe in the living room to stare at or took it to track.

Also, this bike was never sold as a street bike in the US. There were 15 units sold in the US to homologate the model. All of those were sold directly to licensed racers and teams.

The OW-1 eventually was discontinued. It was succeeded by the Yamaha R7 OW-02, which became a very rare motorcycle to collect. It is a legendary homologation bike to many.

The OW-01 might not have been as successful as racing as the Honda RC30 was. But the Yamaha was very good at something else; stealing hearts. The design of the fairings was special back then. It came with a certain subtlety you normally only saw at hand built bikes.

BETTER KNOW FOR ITS FACTORY CODE

It was – and still is – also a rather rare motorcycle to own. Not just because there were limited units made, but also because it was quite expensive to buy when it was introduced. Back in 1989, the OW01 cost 12.700 British pounds. To put that into perspective; the very populair and successful Honda RC30 was eight grand. So it became more exclusive than the RC30.

The OW01 shares one thing with the Honda RC30; they are both better known by their factory code rather than their model names, being FZR750R and VFR750R. It just adds some allure and prestige to them.

When it comes to race results, the Yamaha FZR750R OW01 was never as successful as the Honda VFR750R RC30. But if you count the hearts that the OW01 has stolen, it will probably be a tie between the two.

The Yamaha OW01 was a factory race bike straight from the box. Nothing in it screamed ‘road legal’ and still it was. Since it was so race oriented, it also came with a fairly high price tag. This resulted in the OW01 being more exclusive than the RC30. It has become a true collectors item.

Not many FZR750R OW01 bikes ended up on the road. A fairly small amount actually got registered for road use. It almost sounds like a little fairy tale; most of the bikes ended up where they were designed, build and produced for. On track. To do what they did best; race.

Due to its almost cute looks, the chubby cheeks, the big booty and still very racy specifications, this OW01 rightfully deserves a spot in our Classic Crush-series. 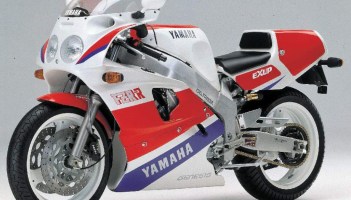 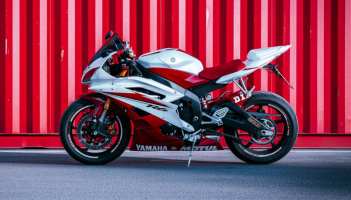 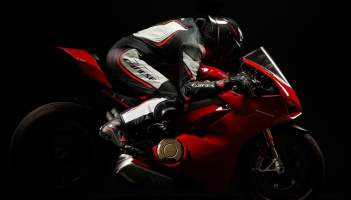